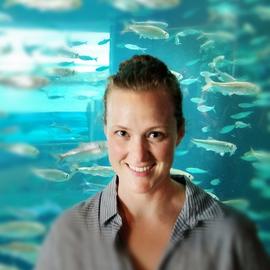 My research interests broadly center on cardiovascular responses to physiological and abiotic stress. I use a comparative approach to look for commonalities in how cardiovascular systems in animals that inhabit heterogeneous environments overcome physiological and abiotic stress. By conducting research on a phylogenetically diverse number of fish species (including agnathans, chondrichthyans and teleosts), and mammals I have discovered various metabolic, functional, and morphological phenotypes that affect species sensitivity or persistence in the face of anoxia, temperature variation, pollution, and disease. The unifying goal of my research is to make fundamental discoveries on cardiovascular function and apply them to further our understanding of species’ underlying physiology. Past and present research topics:

My approach to obtaining data blends the functional understanding that comes from basic comparative physiology with the fields of conservation, toxicology, and evolutionary biology. Previously, my research focused on the relationship between cardiovascular physiology and organismal function using a diverse number of elasmobranch species. By exploring inter-and intra- species variation in cardiovascular variables I discovered a mechanism that allows adequate oxygen to be delivered to the heart during times of extreme physiological stress. The discovery of this mechanism allowed me to detect similarities with mammalian cardiovascular function and identify possible underlying mechanisms that may be present in vertebrates in general. Furthermore, my morphological analysis of the coronary circulation across shark taxa using classical corrosion casting, histological techniques, and 3D imaging of vascular beds combined with phylogenetic analysis and basic fluid dynamics led me to discover that temperature plays a role as a selective pressure on the design of vascular beds.

During my first postdoc I expanded my work to investigate whether phenotypic plasticity allow species to overcome anthropogenic sources of environmental pollution in the form of polycyclic aromatic hydrocarbons (PAHs -the toxic components of oil) that would otherwise be lethal. As part of the RECOVER consortium I was able to collaborate with geneticists, aquacultural scientists, developmental biologists, physiologists, and toxicologists to tackle the question of how fish species respond to PAH exposure on multiple levels of biological organization.

During a post doctoral research position at the University of Pennsylvania I utilized gene knockout and inducible gene knockout models to investigate how specific cell signaling pathways can lead to disease states, such as cardiomyopathy, cardiac conduction disease, and sudden cardiac death in mammalian models. Working with biomedical models has allowed me to expand my skillset to include genetic sequencing and these are valuable tools when considering the diverse responses of the cardiovascular system to environmental changes across species of ectothermic animals.

I was previously at in the Department of Integrative Biology at the University of Guelph in Todd Gillis' lab https://comparativephys.ca/gillislab/ where I investigated the spectacular anoxia tolerance of a phylogenetically ancient species of hagfish. I have previously discovered a number of diverse cardiovascular and biochemical phenotypes that permitted survival of these fish for >36h of complete oxygen deprivation in the Farrell lab at the University of British Columbia (UBC). These discoveries provided new insight into cardiovascular function that has been traditionally viewed as a highly aerobic process. Currently I am expanding on discoveries made in the Gillis lab that indicate hagfish a use atypical biochemical pathways to ensure their anoxic survival - stay tuned.

Georgina K. Cox: Curriculum Vitae
Scholarly Assistant Professor Washington State University
Last updated on Jan 18, 2022 10 min read
Documentary film: Dispatches From The Gulf 2
I appeared in the documentary movie Dispatches From the Gulph 2, narrated by actor Matt Damon, that examined the mission to study the impacts of the Deepwater Horizon oil spill.
Last updated on Dec 15, 2021 1 min read
Nomination for Postdoc Councillor of Canadian Society of Zoologists
The Canadian Society of Zoologists, as the leading society for advancement of zoological research, is essential for fostering the development of young scientists and enthusiasm towards research in our field. As such, postdoctoral representation on the Council and CSZ meetings and events is essential for the advancement of both the field of zoology and for postdocs themselves.
Last updated on Dec 15, 2021 2 min read
Research Experience
My research interests have necessitated the development of a wide array of scientific abilities, spanning across field, laboratory, surgical, biochemical, histological, and analytical techniques. I have gained valuable insight into the importance and limitations of fieldwork by conducting research on three marine research vessels and by participating in the capture of a variety of large, dangerous, and fragile fish species. These experiences taught me appropriate fish handling, holding, and transportation techniques along with how sample, tag, and release fish.
Last updated on Dec 15, 2021 2 min read
Biography continued
My primary over-arching interest is understanding how marine organisms that inhabit heterogeneous environments are able to physiologically cope with abiotic stressors and changing environments. Organisms are facing challenges from rapidly changing environments (e.
Last updated on Dec 15, 2021 1 min read

*
All Deep Learning Other
Form, Function, and Evolution of the Coronary Artery
In this set of studies, I use sharks as a model system to study the functional significance of the cardiac oxygen supply. Sharks are ideal model species as they are the most ancient vertebrates to possess a coronary artery and, like mammals, have fully vascularized hearts.
Georgina K. Cox

Cardiac function following oil exposure in pelagic fish
During my postdoc as part of the RECOVER consortium, funded through GOMRI, I have investigated whether phenotypic plasticity allows species to overcome anthropogenic sources of environmental pollution in the form of polycyclic aromatic hydrocarbons (PAH’s), the toxic components of oil.
Georgina K. Cox

Cardiovascular function in response to environmental anoxia
The vast majority of vertebrates can survive only minutes when cut off from oxygen, but some have physiological and biochemical adaptations that allow long term survival in anoxic environments.
Georgina K. Cox

(2016). Morphological arrangement of the coronary vasculature in a shark (Squalus sucklei) and a teleost (Oncorhynchus mykiss). Journal of Morphology, 277: 896–905.